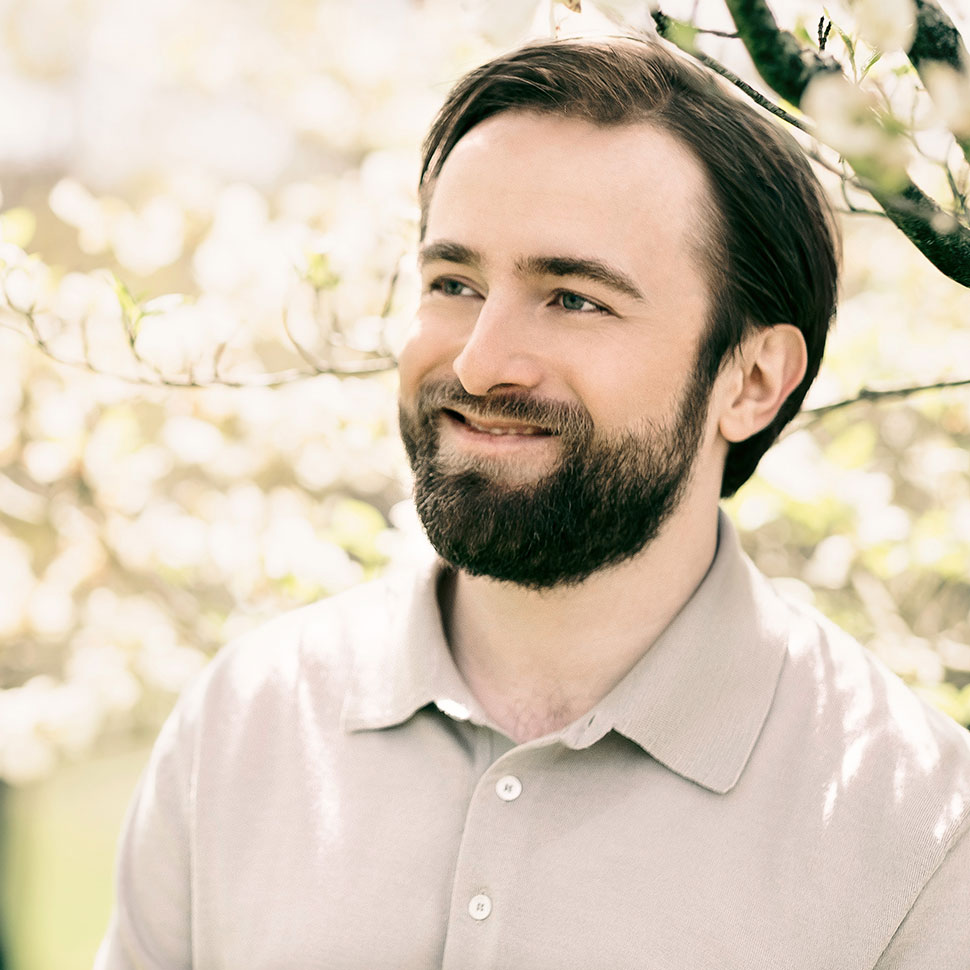 Grammy Award-winning pianist Daniil Trifonov (dan-EEL TREE-fon-ov) – Musical America’s 2019 Artist of the Year – has made a spectacular ascent of the classical music world, as a solo artist, champion of the concerto repertoire, chamber and vocal collaborator, and composer. Combining consummate technique with rare sensitivity and depth, his performances are a perpetual source of awe. “He has everything and more … tenderness and also the demonic element. I never heard anything like that,” marveled pianist Martha Argerich. With Transcendental, the Liszt collection that marked his third title as an exclusive Deutsche Grammophon artist, Trifonov won the Grammy Award for Best Instrumental Solo Album of 2018. As The Times of London notes, he is “without question the most astounding pianist of our age.”

In October of 2021, Trifonov released Bach: The Art of Life on Deutsche Grammophon, including The Art of Fugue with the pianist’s own completion of the final contrapunctus, selections from the Notebook for Anna Magdalena Bach, music by four of Johann Sebastian’s sons, two pieces known to have been Bach family favorites, and more. He toured a recital program in the 2021-22 season centered on The Art of Fugue in Europe, and a second program in the U.S. of Prokofiev, Szymanowski, Debussy and Brahms. Brahms’s First Piano Concerto served as the vehicle for appearances with the Dallas Symphony led by Fabio Luisi and Philharmonia Zurich under the direction of Gianandrea Noseda, and with Rome’s Orchestra dell’Accademia Nazionale di Santa Cecilia led by Antonio Pappano he performs Mozart’s Ninth “Jeunehomme” Piano Concerto on a European tour. He also performed all five of Beethoven’s Piano Concertos in various combinations with eight different orchestras: the New York Philharmonic, Cincinnati Symphony, New Jersey Symphony, Munich Philharmonic, Mariinsky Orchestra, Orchestre des Champs-Élysées, Budapest Festival Orchestra and Toronto Symphony. Balancing out these staples of the repertoire, Trifonov gave the world premiere performances of Mason Bates’s new Piano Concerto, composed for him during the pandemic, with the co-commissioning Philadelphia Orchestra and Yannick Nézet-Séguin, before reprising the piece in the spring with the New Jersey Symphony, Israel Philharmonic, and the other co-commissioner, the San Francisco Symphony.

Fall 2020 brought the release of Silver Age, an album of Russian solo and orchestral piano music by Scriabin, Prokofiev and Stravinsky, recorded with Gergiev and the Mariinsky Orchestra. This followed 2019’s Destination Rachmaninov: Arrival, for which Trifonov received a 2021 Grammy nomination. Presenting the composer’s First and Third Concertos, Arrival represents the third volume of the Deutsche Grammophon series he recorded with the Philadelphia Orchestra and Nézet-Séguin, following Destination Rachmaninov: Departure, named BBC Music’s 2019 Concerto Recording of the Year, and Rachmaninov: Variations, a 2015 Grammy nominee. Deutsche Grammophon has also issued Chopin Evocations, which pairs the composer’s works with those by the 20th-century composers he influenced, and Trifonov: The Carnegie Recital, the pianist’s first recording as an exclusive Deutsche Grammophon artist, which captured Trifonov’s sold-out 2013 Carnegie Hall recital debut live and scored him his first Grammy nomination.

It was during the 2010-11 season that Trifonov won medals at three of the music world’s most prestigious competitions, taking Third Prize in Warsaw’s Chopin Competition, First Prize in Tel Aviv’s Rubinstein Competition, and both First Prize and Grand Prix – an additional honor bestowed on the best overall competitor in any category – in Moscow’s Tchaikovsky Competition. In 2013 he was awarded the prestigious Franco Abbiati Prize for Best Instrumental Soloist by Italy’s foremost music critics, in 2016 he was named Gramophone’s Artist of the Year and in 2021 he was made a “Chevalier de l’Ordre des Arts et des Lettres” by the French government.

Born in Nizhny Novgorod in 1991, Trifonov began his musical training at the age of five, and went on to attend Moscow’s Gnessin School of Music as a student of Tatiana Zelikman, before pursuing his piano studies with Sergei Babayan at the Cleveland Institute of Music. He has also studied composition, and continues to write for piano, chamber ensemble, and orchestra. When he premiered his own Piano Concerto, the Cleveland Plain Dealer marveled: “Even having seen it, one cannot quite believe it. Such is the artistry of pianist-composer Daniil Trifonov.”